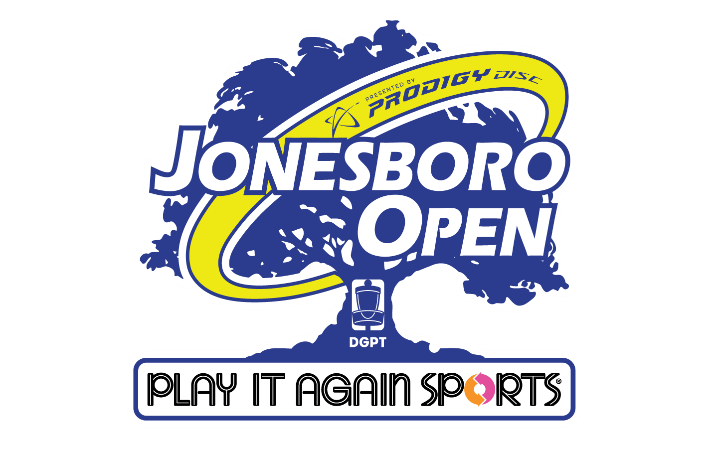 JONESBORO, AR:  Officials from the Disc Golf Pro Tour (DGPT) and the Professional Disc Golf Association (PDGA) have announced the plan to restart the 2020 DGPT Season, and it includes a new date for the Play It Again Sports Jonesboro Open. The professional disc golf tournament will be played Oct. 1-3 at Disc Side of Heaven near RidgePointe Country Club.

The 2020 season was put on hold in mid-March due to the Covid-19 virus.  The original date for the Jonesboro Open was April 17-19 and it was the next scheduled event on the Disc Golf Pro Tour when the tour was placed on hold.

The new date will now make the fourth edition of the Jonesboro Open the last DGPT event before the Tour Championship which will be held on Oct. 16-18 in Charlotte, North Carolina. The tournament is just days before the United States Disc Golf Championship (USDGC) Oct. 7-10 and will be the last qualifier for players to earn entry into that Major.

Play It Again Sports and Prodigy Discs, the tournament’s major sponsors, remain committed to the event, as do the other naming sponsors. Proceeds from the event will continue to go to The Arkansas Pet Savers.

“We are very excited to have the opportunity to bring the best in the world to Jonesboro in 2020 after the events that have hit our community this year,” said Brad Pietz, Tournament Director for the event.

“Jonesboro had a rough spring. My hope is this event will help continue the healing process as we host these professional athletes in the last battle before the USDGC and the Tour Championship.”

Jeff Spring, Director of the DGPT, said it was a priority of his for the tour to make a 2020 stop in Jonesboro.

“We looked at several options to get back to Jonesboro this year. Of all the dates we considered, we believe the first weekend in October was the homerun option,” he said. “We are beyond pleased to get this tournament in before the Tour Championship.”

Dan Koukol, CEO of Prodigy Discs, had this to say about the new date: “The team at Prodigy is thrilled that the DGPT is returning to action and could not be more excited for the 2020 Jonesboro Open this fall.  We are looking forward to another wonderful event this year as amateurs and pros alike get back to playing disc golf; and what better setting than Disc Side of Heaven?”

This will mark the first time the three-day event will be held on Thursday through Saturday. Officials elected to use these days so players would have an extra day to travel between Jonesboro and Rock Hill, SC, the location of the USDGC.

More details regarding the tournament guidelines will be released at a later date.  For more information on the Play It Again Sports Jonesboro Open – Presented by Prodigy, go to JonesboroOpen.com